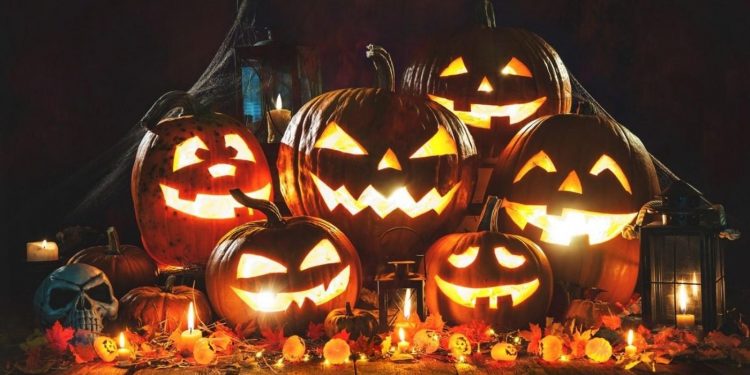 Trick or treat! Three most ominous words uttered by roaming ghouls, goblins, ghosts and other fell creatures of the dark. Now before you scamper off to hide under your bed, remember that it’s October 31st. Halloween night!

It’s the night of Jack-O’-Lanterns, spooky costumes, horrific décor, and treats. This tradition harkens to the old traditional Celtic holiday, their New Year, which falls on November 1st. The name itself is a contraction of “hallow’s evening,” and could also mean Saint’s evening, as it precedes our modern (Christian) All Saint’s Day commemoration on November 1st.

The costumes are meant to scare off evil spirits, not people, but they tend to get very intimidating at times. Modern costumes using state-of-the-art prosthetics appear to be as frighteningly real as possible.

The most prolific designs or decors include pumpkins (denoting Good ole’ Jack), candles, skulls and skeletons, scarecrows, ghosts, witches, cobwebs, bats, and the predominantly dark color black. Of course, the vast number of stories and movies has added infamous characters to the ever-expanding list of strange and mysterious creatures.

Examples of these are Count Dracula, the Headless Horseman, Darth Vader, Darth Maul, and Emperor Palpatine from Star Wars, Jason from Friday the Thirteenth, Freddy Krueger of Nightmare on Elm Street, the Xenomorph from Aliens, the Predator creature, and a host of other baddies.

The ultimate activity of Halloween is “trick or treating.” Nothing compares to the excitement of going in groups with friends and relatives from one house to another, asking for treats. During earlier times, not all the hosts were ready to give out gifts (candies and other goodies) to the troopers, so they end up having tricks played upon them. In modern times, that is seldom the case, and most, if not all, the time, treats are being doled out automatically.

Now, Halloween Trick or Treating is not an exclusive domain of children. Adults, some the accompanying parents of the younger participants, also take part in this most jovial of festivities. That could be attributed to their longing for experiencing once again that which they enjoyed during their youth.

In recent years, other kinds of “beings” also participate in the rituals. Pets, in ever-growing numbers and popularity, have been an integral part of the festivities. Hundreds of millions of dollars are spent by Americans annually for their pets’ costumes, which ranges from pumpkins to hotdogs, and bees.

Now aside from the roaming and treats, attractions are also tailor-fitted to the Halloween festivities in the form of haunted houses, Halloween theme parks, and even concerts. Are you brave enough to face the horrors lurking within the dark halls of such places?

Halloween is undoubtedly not concentrated in the United States alone, as its origins came from the UK and Europe. The other parts of the world also commemorate All Soul’s and All Saint’s Days in their particular ways, so they also have corresponding Halloween rites and celebrations.

But whatever forms they come, one thing is the same: the spirit of enjoyment and celebration. The following notable Halloween quotes will surely put you in that spirit with family and friends.

Enjoy your Trick or Treating and Happy Halloween!

The only thing that really scares me about Halloween is running out of candy.
Melanie White

Nothing beats a haunted moonlit night on All Hallows Eve…. And on this fatal night, at this witching time, the starless sky laments black and unmoving. The somber hues of an ominous, dark forest are suddenly illuminated under the emerging face of the full moon.
Kim Elizabeth

Know why mummies never reveal their true age? ‘Cause they like to keep it under wraps.
Unknown

The witches fly across the sky, The owls go, Who? Who? Who? The black cats yowl And green ghosts howl, Scary Halloween to you!
Nina Willis Walter

The real monsters are the people that give away little boxes of raisins instead of Halloween candy.
Mike Raphone

I heard one cry in the night, and I heard one laugh afterwards. If I cannot forget that, I shall not be able to sleep again.
M.R. James

There are three things I have learned never to discuss with people: religion, politics and the Great Pumpkin.
Linus

What is a ghost’s favorite dessert? Boo-berry pie with ice scream!
Unknown 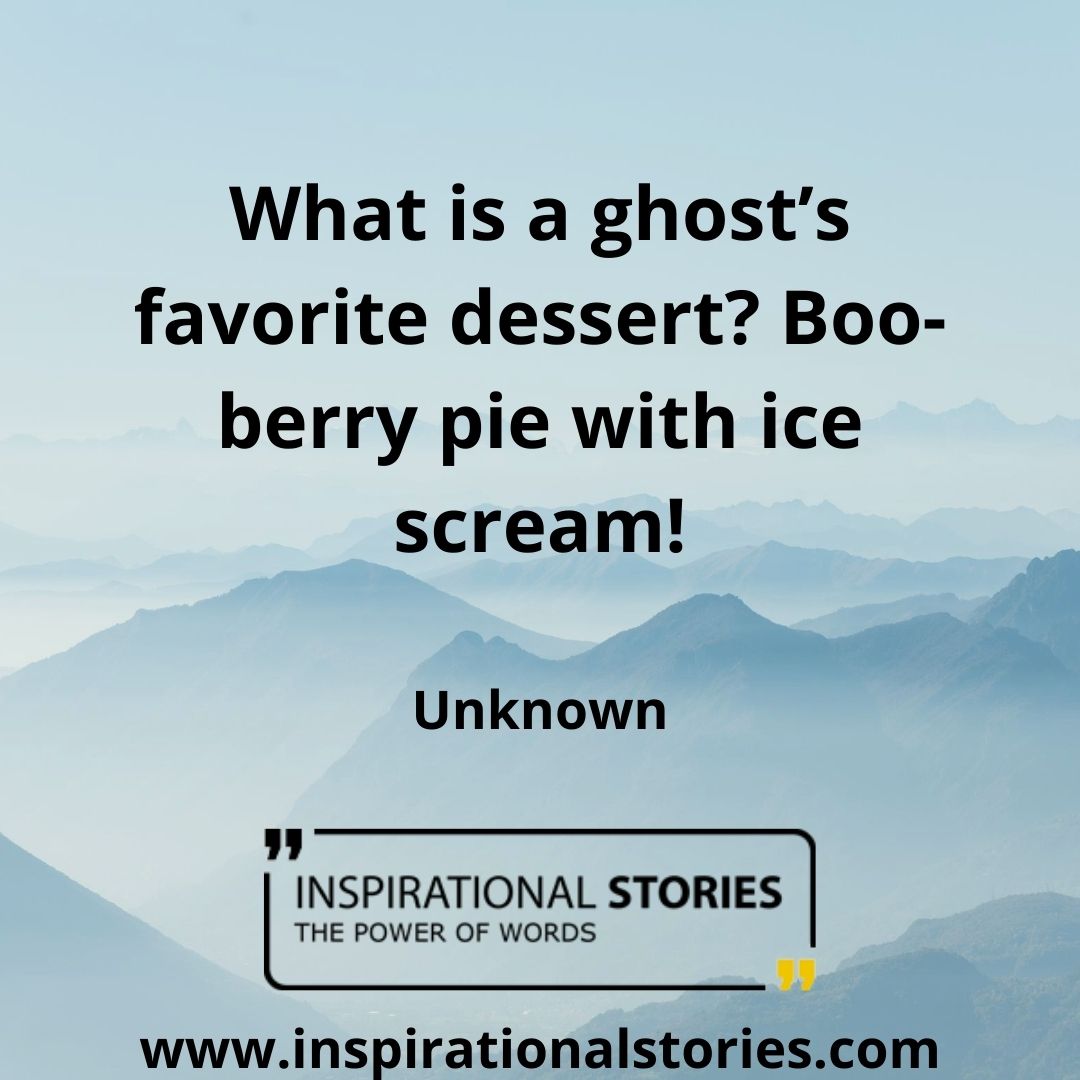 When I was a kid my family was really poor and I remember one Halloween I wanted to dress up really scary and my parents came home with a duck costume. I wore that costume for years! I hated it.
R.L. Stine

Halloween was confusing. All my life my parents said, “Never take candy from strangers.” And then they dressed me up and said, “Go beg for it.” I didn’t know what to do! I’d knock on people’s doors and go, “Trick or treat.” “No thank you.”
Rita Rudner

I would like, if I may, to take you on a strange journey.
The Criminologist, The Rocky Horror Picture Show (1975)

From ghoulies and ghosties and long leggety beasties and things that go bump in the night, Good Lord, deliver us!
Scottish Saying

There are nights when the wolves are silent and only the moon howls.
George Carlin

I’m a homicidal maniac, they look just like everyone else.
Wednesday, The Addams Family (1991)

I would rather sit on a pumpkin and have it all to myself than be crowded on a velvet cushion.
Henry David Thoreau

Do you believe in destiny? That even the powers of time can be altered for a single purpose? That the luckiest man who walks on this earth is the one who finds … true love?
Dracula (1992)

There is nothing funny about Halloween. This sarcastic festival reflects, rather, an infernal demand for revenge by children on the adult world.
Jean Baudrillard

People value Halloween, like Valentine’s Day, because they can tell themselves that it’s not merely secularized but actually secular, which is to say, not Christian, Jewish, Hindu or Muslim.
Amity Shlaes

You are too precious for words, why I could just… eat you alive!
Margaret, The Addams Family (1991) 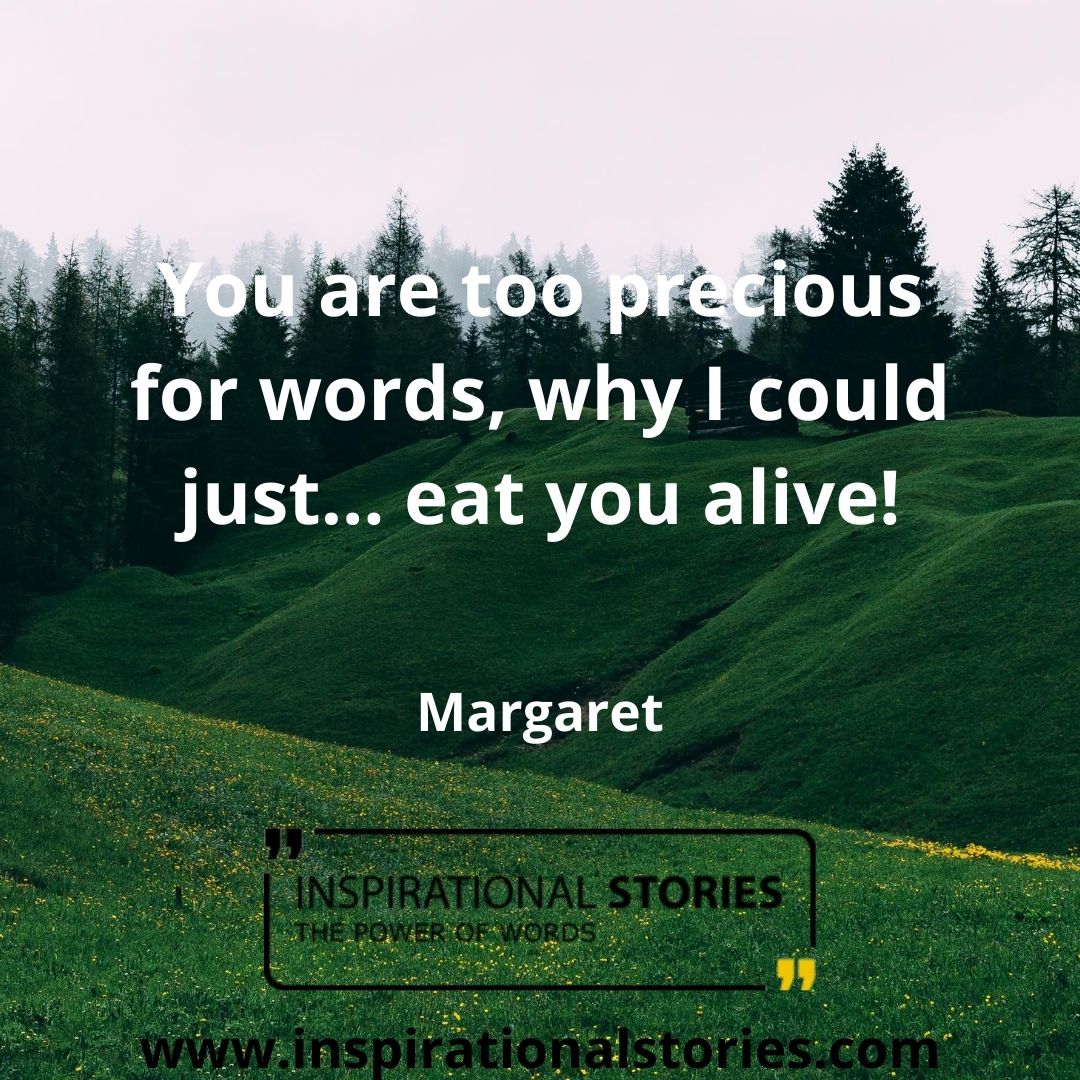 Acting is like a Halloween mask that you put on.
River Phoenix

When there’s no more room in hell, the dead will walk the earth.
Televangelist, Dawn of the Dead (2004)

Everyone is a moon and has a dark side, which he never shows to anybody.
Mark Twain

Death has come to your little town, Sheriff. You can either ignore it, or you can help me to stop it.
Dr. Sam Loomis, Halloween (1978)

I’m a master of fright and a demon of light, and I’ll scare you right out of your pants.
Jack Skellington, The Nightmare Before Christmas (1993)

Seems like Americans just want it to be Halloween all year. The holiday just keeps getting more popular.
Amity Shlaes

You can’t tell what’s in a monster’s heart just by looking at ’em. I mean, sometimes, some of the slimiest, raunchiest, ugliest little monsters turn out to be the nicest.
Aggie Cromwell, Halloweentown (1998) 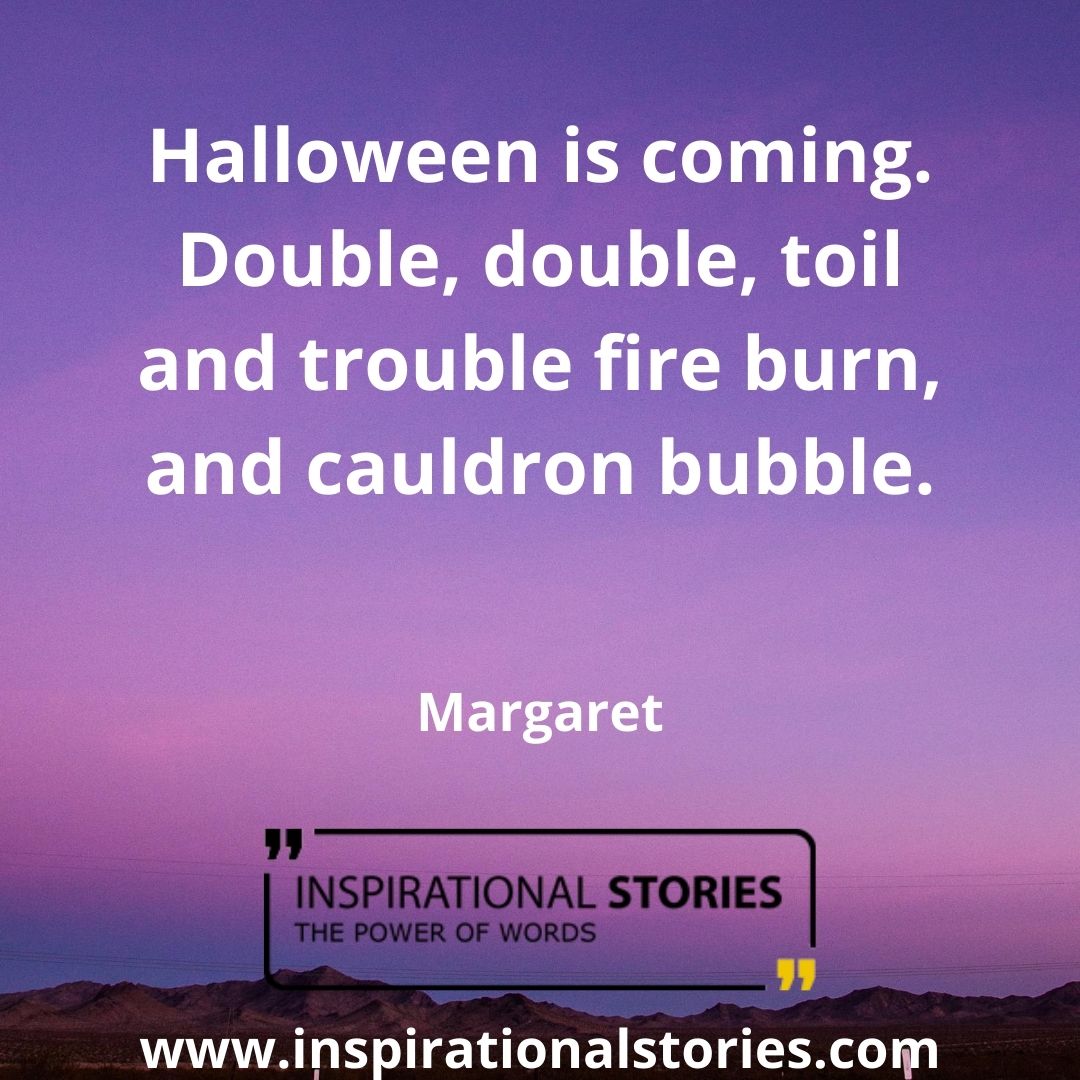 Halloween wraps fear in innocence, As though it were a slightly sour sweet. Let terror, then, be turned into a treat…
Nicholas Gordon

Magic is really very simple, all you’ve got to do is want something and then let yourself have it.
Aggie Cromwell, Halloweentown (1998)

Halloween is huge in my house and we really get into the “spirits” of things.
Dee Snider

So this world wide web I’ve heard about… Does it involve spiders?
Aggie Cromwell, Halloweentown (1998)

There is something haunting in the light of the moon; it has all the dispassionate of a disembodied soul, and something of its inconceivable mystery.
Joseph Conrad

I am the shadow on the moon at night, filling your dreams to the brim with fright.
Oogie Boogie Man, The Nightmare Before Christmas (1993)

I don’t know that there are real ghosts and goblins, but there are always more trick-or-treaters than neighborhood kids.
Robert Brault

This is Halloween, everybody make a scene Trick or treat till the neighbors gonna die of fright It’s our town, everybody scream In this town of Halloween.
Danny Elfman

That’s right. I AM THE PUMPKIN KING!
Jack Skellington, The Nightmare Before Christmas (1993) 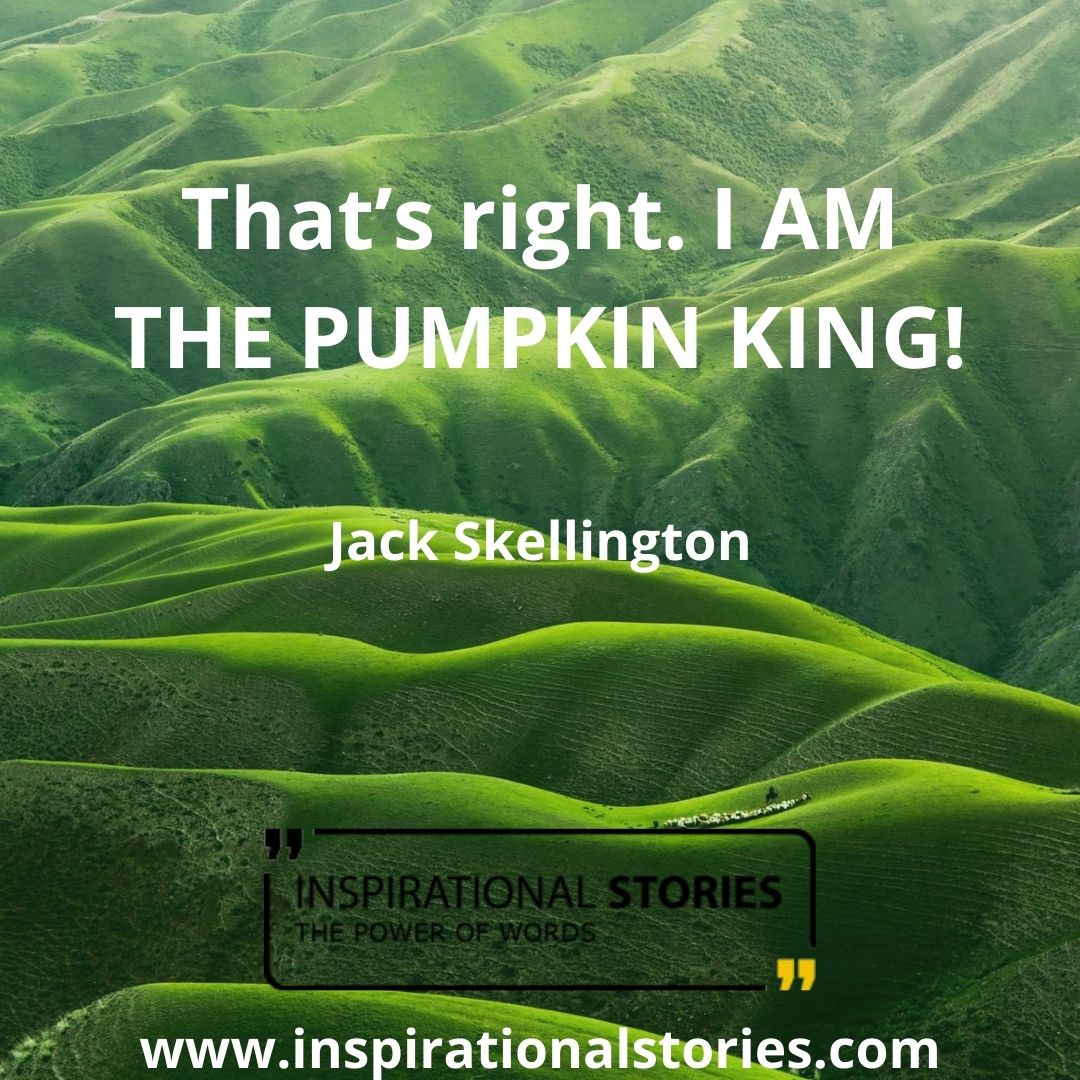 Some people are born for Halloween, and some are just counting the days until Christmas.
Stephen Graham Jones

I have to be honest. I don’t really look forward to Halloween as much as November 1st. November 1st should be named ‘Discount Candy Day.’
Theresa Weaver

Nothing on Earth so beautiful as the final haul on Halloween night.
Steve Almond

October extinguished itself in a rush of howling winds and driving rain and November arrived, cold as frozen iron, with hard frosts every morning and icy drafts that bit at exposed hands and faces.
J.K. Rowling, Harry Potter and the Order of the Phoenix

As spirits roam the neighborhoods at night, let loose upon the Earth till it be light…
Nicholas Gordon

The house was very quiet, and the fog—we are in November now—pressed against the windows like an excluded ghost.
E.M. Forster, Howards End

There is October in every November and there is November in every December! All seasons melted in each other’s life!
Mehmet Murat ildan

I don’t know that there are real ghosts and goblins, But there are always more trick-or-treaters than neighborhood kids.
Robert Brault

Welcome sweet November, the season of senses and my favorite month of all.
Gregory F. Lenz

Proof of our society’s decline is that Halloween has become a broad daylight event for many.
Robert Kirby

Men fear death as children fear to go in the dark; and as that natural fear in children is increased with tales, so is the other.
Sir Francis Bacon

I have come to regard November as the older, harder man’s October. I appreciate the early darkness and cooler temperatures. It puts my mind in a different place than October. It is a month for a quieter, slightly more subdued celebration of summer’s death as winter tightens its grip.
Henry Rollins

Alone. Yes, that’s the keyword, the most awful word in the English tongue. Murder doesn’t hold a candle to it and hell is only a poor synonym.
Stephen King

But I love Halloween, and I love that feeling: the cold air, the spooky dangers lurking around the corner.
Evan Peters

November is auspicious in so many parts of the country: the rice harvest is already in, the weather starts to cool, and the festive glow which precedes Christmas has begun to brighten the landscape.
F. Sionil Jose

But whatever forms they come, one thing is the same: the spirit of enjoyment and celebration. The following notable Halloween quotes will surely put you in that spirit with family and friends.

Enjoy your Trick or Treating and Happy Halloween!