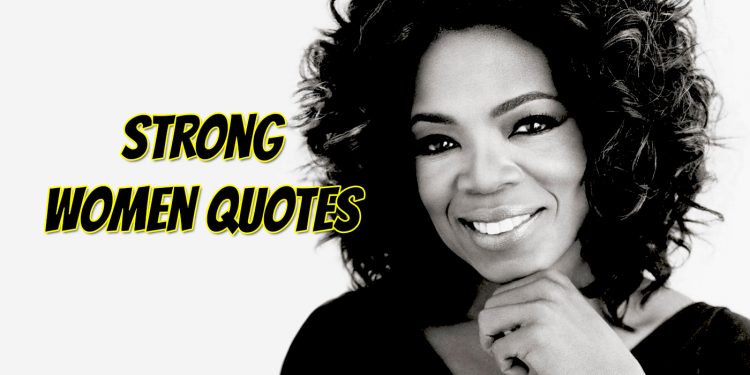 Everyone has someone in their life, which is perceived as a strong woman and is considered a source of inspiration. This strong woman is kind, passionate about her desires, confident about her work, strives hard to achieve her dreams and never gives up in case of any setback or lets fear override her ambitions.

A strong woman is humble about her accomplishments, stays hopeful and rests her faith in Almighty. Here are few of the quotes by strong women, who have fiercely worked upon their goals and stated their school of thought in the process of stepping up towards their dream.

Whatever women do, they must do twice as well as men to be thought half as good. Luckily, this is not difficult. Charlotte Whitton

Being brave enough to just be unapologetic for who you areâ€š that’s a goddess. BANKS

Women think with their whole bodies and they see things as a whole more than men do. Dorothy Day

A strong women is someone who is able to smile this morning like she wasn’t crying last night. Harriet Morgan

Every time I fail I assume I will be a stronger person for it. Joan Benoit

One likes people much better when they’re battered down by a prodigious siege of misfortune than when they triumph. Virginia Woolf

My best successes came on the heels of failures. Barbara Corcoran

Define success on your own terms, achieve it by your own rules, and build a life you’re proud to live. Anne Sweeney

If you’re a strong man, you should not feel threatened by strong women. Barack Obama

The future belongs to those who believe in the beauty of their dreams. Eleanor Roosevelt

Decide…whether or not the goal is worth the risks involved. If it is, stop worrying. Amelia Earhart

We must have perseverance and above all confidence in ourselves. Marie Curie

Whatever you do, be different. If you’re different, you will stand out. Anita Roddick

Everyone has inside of him a piece of good news. The good news is that you don’t know how great you can be! How much you can love! What you can accomplish! And what your potential is! Anne Frank

My experience has been that work is almost the best way to pull oneself out of the depths. Eleanor Roosevelt

Whatever you do, be different – that was the advice my mother gave me, and I can’t think of better advice for an entrepreneur. If you’re different, you will stand out. Anita Roddick

The most courageous act is still to think for yourself. Aloud. Coco Chanel

If you set out to be liked, you would be prepared to compromise on anything at any time, and you would achieve nothing. Margaret Thatcher

If you obey all the rules you miss all the fun. Katharine Hepburn

Doing something for yourself like running, and using it to test yourself, will only make you feel better about your career or your family role. Joan Benoit

And yet women-good women–frightened me because they eventually wanted your soul, and what was left of mine, I wanted to keep. Charles Bukowski

Even the most powerful woman needs a place to unwind. Barbara Taylor Bradford

We still live in a world in which a significant fraction of people, including women, believe that a woman belongs and wants to belong exclusively in the home. Rosalyn Sussman Yalow

A girl should be two things: classy and fabulous. Coco Chanel

Be gentle, kind and beautiful, yet firm and strong, both mentally and physically. Keiko Fukuda

I think women are very powerful and I think we’re more powerful together than separated. Zendaya

How important it is for us to recognize and celebrate our heroes and she-roes! Maya Angelou

Women make up one half of society. Our society will remain backward and in chains unless its women are liberated, enlightened and educated. Saddam Hussein

“Beneath every strong, independent woman lies a broken little girl who had to learn how to get back up and to never depend on anyone.”

Oprah Winfrey Quotes Think like a queen. A queen is not afraid to fail. Failure is another steppingstone to greatness. – Oprah Winfrey

“Doubt is a killer. You just have to know who you are and what you stand for.” – Jennifer Lopez

“A strong woman looks a challenge dead in the eye and gives it a wink.”

“Some women choose to follow men, and some choose to follow their dreams. If you’re wondering which way to go, remember that you career will never wake up and tell you that it doesn’t love you anymore.” – Lady Gaga

Strong Women Quotes on Self Esteem

Some women have an incomparable strength given that they might have possibly gone through various problems in their budding years. The injustice, the inferiority or the compromise of their self-worth has fuelled their desire to accomplish their dreams and be independent. It has been seen that strong women who value their self-respect are often misinterpreted for being arrogant.

Yes, it’s true that strong women care less for the perspective of those who try to bring them down but they value the opinion of anyone who might help them correct them in any way. Below quotes convey the following emotions stated above in a crisp manner.

Be strong enough to let go and wise enough to wait for what you deserve.

The best thing a woman can learn is to never need a man.

Something will grow from all you are going through…and it will be you.

I’m stronger now because I’ve learned to turn heartbreak into peace, hurt into love and anger into forgiveness.

“Be the kind of woman that when your feet hit the floor each morning the devil says “Oh crap, she’s up!”

The person I am today would like to thank the person I was 5 years ago for not giving up. You’re awesome!

“I am a strong woman. I don’t sit around feeling sorry for myself, nor let people mistreat me. I don’t respond to people who dictate to me or try to bring me down. If I fall I will rise up even stronger because I am survivor and not a victim. I am in control of my life and there is nothing I can’t achieve.”

If you need something to believe in, start with yourself.

The most important day of your life is the day you decide you are good enough. That is the day that will set you free.

Strong Women Quotes on Self Confidence

Forgive yourself for accepting less than you deserved…but don’t do it again!

You will be too much for some people. Those aren’t your people.

You are amazing and good on you for slaying your demons and showing up to life as the best version of yourself. Keep on keeping on!

“I’m tough, ambitious and I know exactly what I want. If that makes me a bitch, Okay.” – Madonna

Do not waste your precious time giving one single crap about what others think of you!-Jen Sincero

I know what I bring to the table so trust me when I say I’m not afraid to eat alone.

There is this vague notion that goes around that a woman can never be another woman’s best friend. But a strong woman, who is secure enough, would want to inspire other women to prosper along with her. She will provide all the necessary help and motivation to uplift another woman in need.

A strong woman puts forth ample efforts to exemplify that a woman can work equally well in a men dominated world. She remolds every frame that distinguishes a man from a woman and causes disparity in strength, pay or how a woman is looked down upon. Some of the quotes below relate to the oppression a strong woman faces.

“We’ve begun to raise daughters more like sons… but few have the courage to raise our sons more like our daughters.” ― Gloria Steinem

“She is clothed in strength and dignity, and she laughs without fear of the future.” 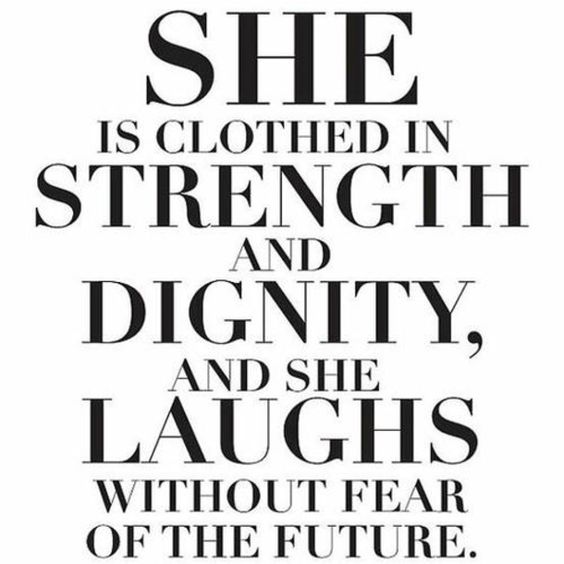 “We must raise both the ceiling and the floor.” ― Sheryl Sandberg,

“The word feminism has become synonymous with man-hating when in fact it has more to do with women than men.” ― Aysha Taryam

“Repression is a seamless garment; a society which is authoritarian in its social and sexual codes, which crushes its women beneath the intolerable burdens of honour and propriety, breeds repressions of other kinds as well.” ― Salman Rushdie,

“I am not a difficult woman at all. I am simply a strong woman and know my worth.” 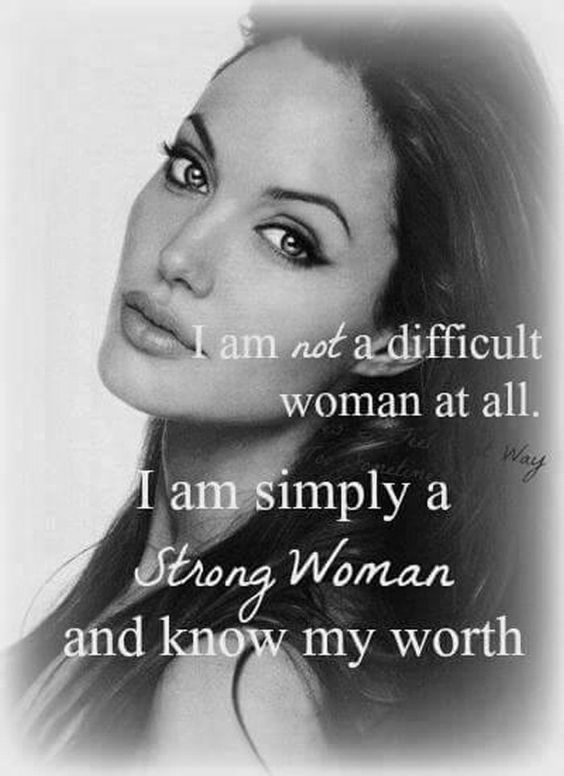 “[A]s people are beginning to see that the sexes form in a certain sense a continuous group, so they are beginning to see that Love and Friendship which have been so often set apart from each other as things distinct are in reality closely related and shade imperceptibly into each other. Women are beginning to demand that Marriage shall mean Friendship as well as Passion; that a comrade-like Equality shall be included in the word Love; and it is recognised that from the one extreme of a ‘Platonic’ friendship (generally between persons of the same sex) up to the other extreme of passionate love (generally between persons of opposite sex) no hard and fast line can at any point be drawn effectively separating the different kinds of attachment. We know, in fact, of Friendships so romantic in sentiment that they verge into love; we know of Loves so intellectual and spiritual that they hardly dwell in the sphere of Passion.” ― Edward Carpenter,

“It is possible for YA heroines to go an entire book without discussing their love lives.” ― Celine Kiernan

“College women are typically given to declaring for one or the other (in my day, for marriage; now, generally, for careers), and only later finding to their surprise that they must cope with both—while their men may be trying to figure out how to get out of doing both.” ― Judith Martin

“Be a strong woman. So your daughter will have a role model and your son will know what to look for in a woman when he’s a man.”

Despite many hurdles, life hurls at a woman. A strong woman chooses to face them with a smile and never lets anything dim her aura. A strong woman is like a Phoenix,  that rises back from its ashes. Hopefully, these quotes inspire the woman struggling to break free from the shackles of anything holding her down.