Rosh Hashanah Quotes To Celebrate The Start Of A Jewish Year 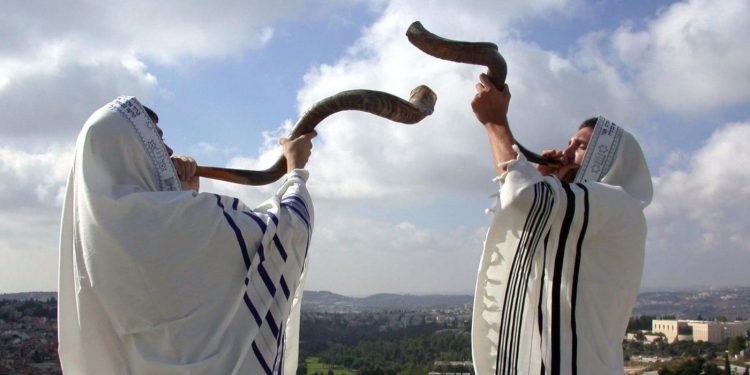 Rosh Hashanah or Jewish New Year is usually celebrated for two consecutive days within the month of September or early October, depending on the correlation between the Jewish ecclesiastical calendar and the Gregorian calendar in a particular year.

Although here in the US, we generally celebrate the holiday in only a single day, some congregations observe it in two following worldwide traditions. It begins at dusk of the first day and ends at nightfall of the second day. According to ancient Jewish custom, it is also traditionally the day Adam and Eve were created. And historically, it coincides with the start of the agricultural cycle in the Southwest Asia region.

The Rosh Hashanah holiday is rife with history and tradition as it is based on a passage in the Torah to “make a noise” by “blowing of horns.” In this instance, the horns refer to the ram’s horns, or what they call “shofar” in Jewish. That particular ceremony then is one of the central highlights in the day’s celebration, along with prayers in the synagogues, and deeply personal reflections.

Prayer services are significantly extended from the versions used on ordinary occasions, and these require the use of a unique prayer book called the ‘mahzor.’ The shofar is blown numerous times during the prayer services, usually after reading particular sets of verses.

Rosh Hashanah is part of a long religious custom in Jewish tradition. About a month preceding the holiday, Jews prepare themselves spiritually by examining oneself and repenting. During this preparatory month, each day starts with the sound of the shofar, which symbolizes a warning for Judgment’s coming.

Rosh Hashanah then starts a 10-day event called the Days of Awe, which ends on the most significant Jewish holiday, the Yom Kippur, or Day of Atonement.

During this holiday, Jews partake of traditional foods like honey-dipped apples that signify the coming of a sweet year. They serve either a lamb’s or fish’s head alluding to a famous prayer. Other significant foods include pumpkin pastries, pomegranates, dates, spinach, leeks, gourd, and peas (black-eyed). Jewish communities also bake challah bread that represents the full year cycle.

As with the ordinary New Years’ (Gregorian calendar) celebration, Rosh Hashanah has its specific greeting that also denotes wishing someone a good year ahead, with the salutation “Shana Tovah.”

Apart from the festivities, traditional events, and religious rites, the most important aspect of the Rosh Hashanah holiday is the examination of oneself. The deep self-reflection is part of the more significant cleansing of the heart, mind, and soul. It is the essence of the Talmudic religion that proclaims a personal relationship with the One True God.

More importantly, it is a journey from the state of sinfulness towards forgiveness and the bliss of reunification with Yahweh. In the fast-paced modern world that we live in, one can quickly lose religious and moral perspectives. With Rosh Hashanah, we get a chance to renew our vows and go back to the righteous path that can lead to a meaningful and happy life.

The key to understanding the themes of Rosh Hashanah is the date. The Day of Judgment for the world was not chosen arbitrarily, but is specifically on this date — not because it is the first day of the year, but because it is the anniversary of the creation of Adam and Eve.
Dr. Warren Goldstein

May it be Your will, Lord our God and God of our ancestors, that you renew for us a good and sweet year’
Hebraic Berakhah 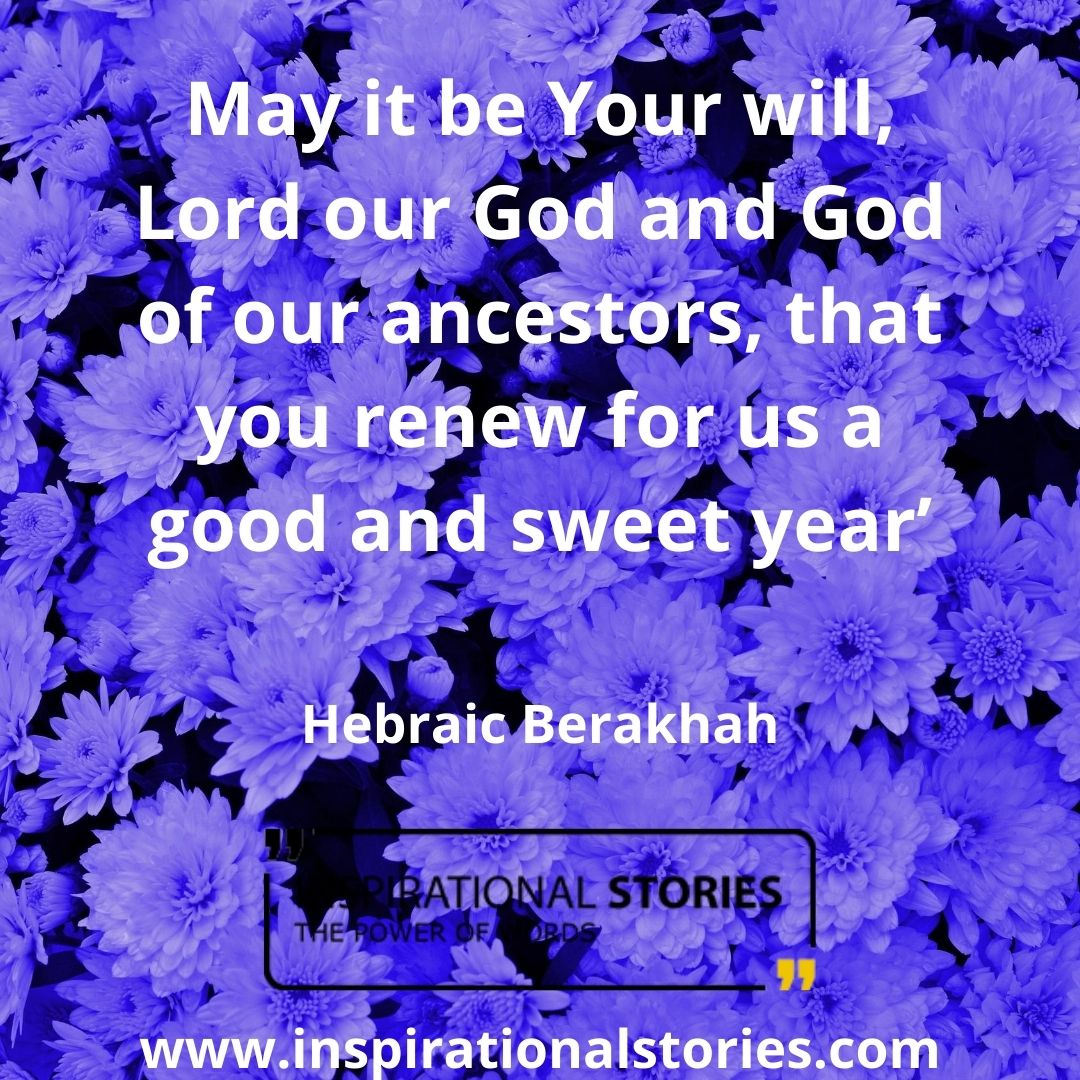 Rosh Hashanah is about relationships. Whether between individuals and the God in whom they believe, communities and the traditions which define them, or simply between individuals, whether any God or tradition is part of their lives, it’s all about sustaining relationships which sustain us and help us do the same for others.
Rabbi Brad Hirschfield 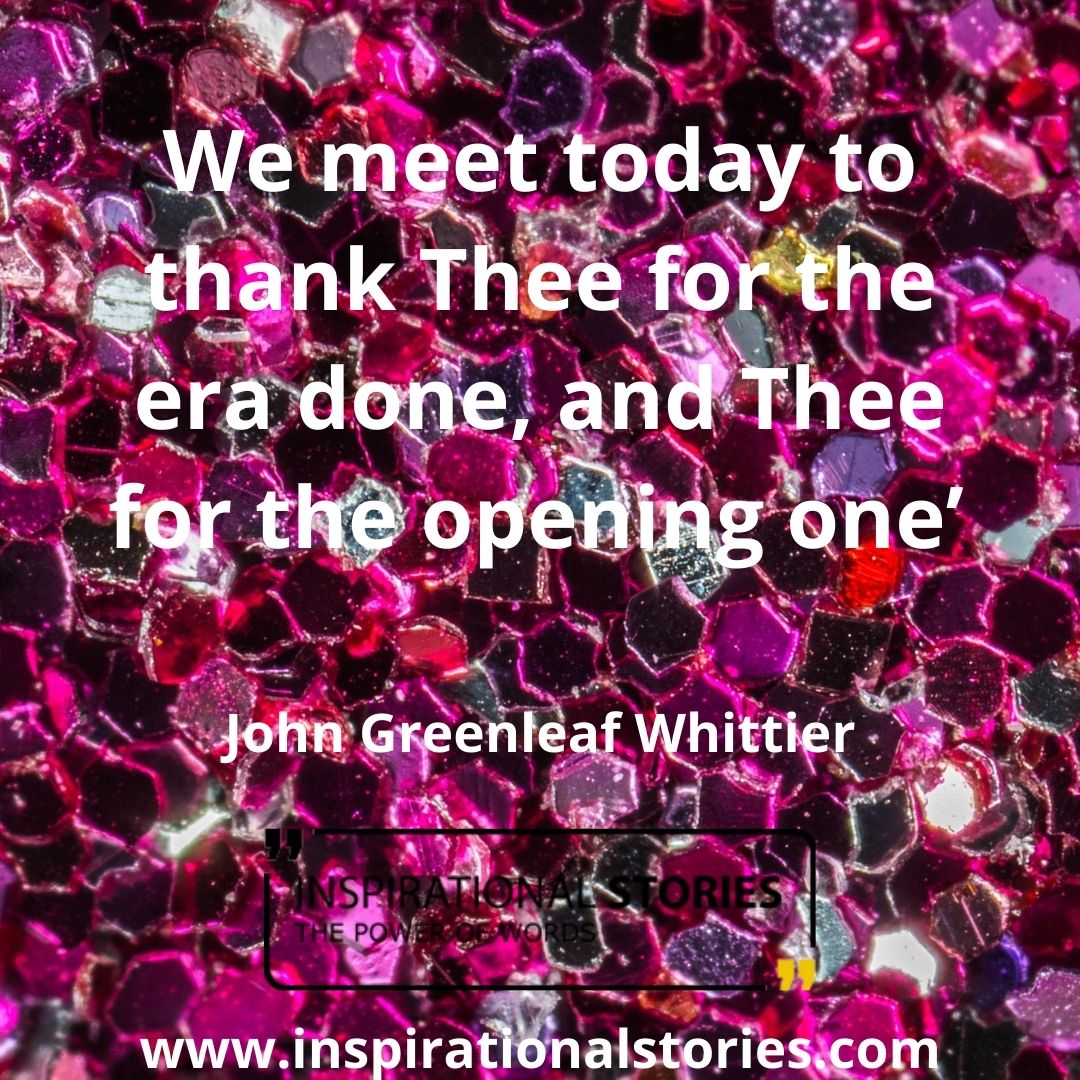 For many Jews, Rosh Hashanah and teshuvah are annual reminders of the possibility to renew relationships with God and with each other.
Rebecca Missel

On Rosh Hashanah all human beings pass before Him as troops, as it is said, ‘the Lord looks down from heaven, He sees all mankind. From His dwelling place He gazes on all the inhabitants of the earth, He who fashions the hearts of them all, who discerns all their doings.’
Rabbi Dr. Reuven Hammer

The blessing over the blowing of the shofar on Rosh Hashanah refers to the mitzvah as “hearing the voice of the Shofar,” but since that voice speaks without words, the message that is heard depends a great deal on who is doing the listening.
Douglas Aronin

What is the essential aspect of Rosh Hashanah? The coronation of G d as King. Thus our Sages quote G d as asking: ‘Say before Me… verses reflecting My Kingship to make Me King over you.’
Eli Touger

On Rosh Hashanah, everything we do is imbued with extreme significance.  We stand in judgment before the Heavenly Court while each of our actions, words, and thoughts are scrutinized.
Rabbi Moshe Schuchman

Rosh Hashanah is the Yom HaDin, the day of Judgment. The scales are poised. Each person is judged according to his deeds (or lack of them).
Slonimer Rebbe Shlita 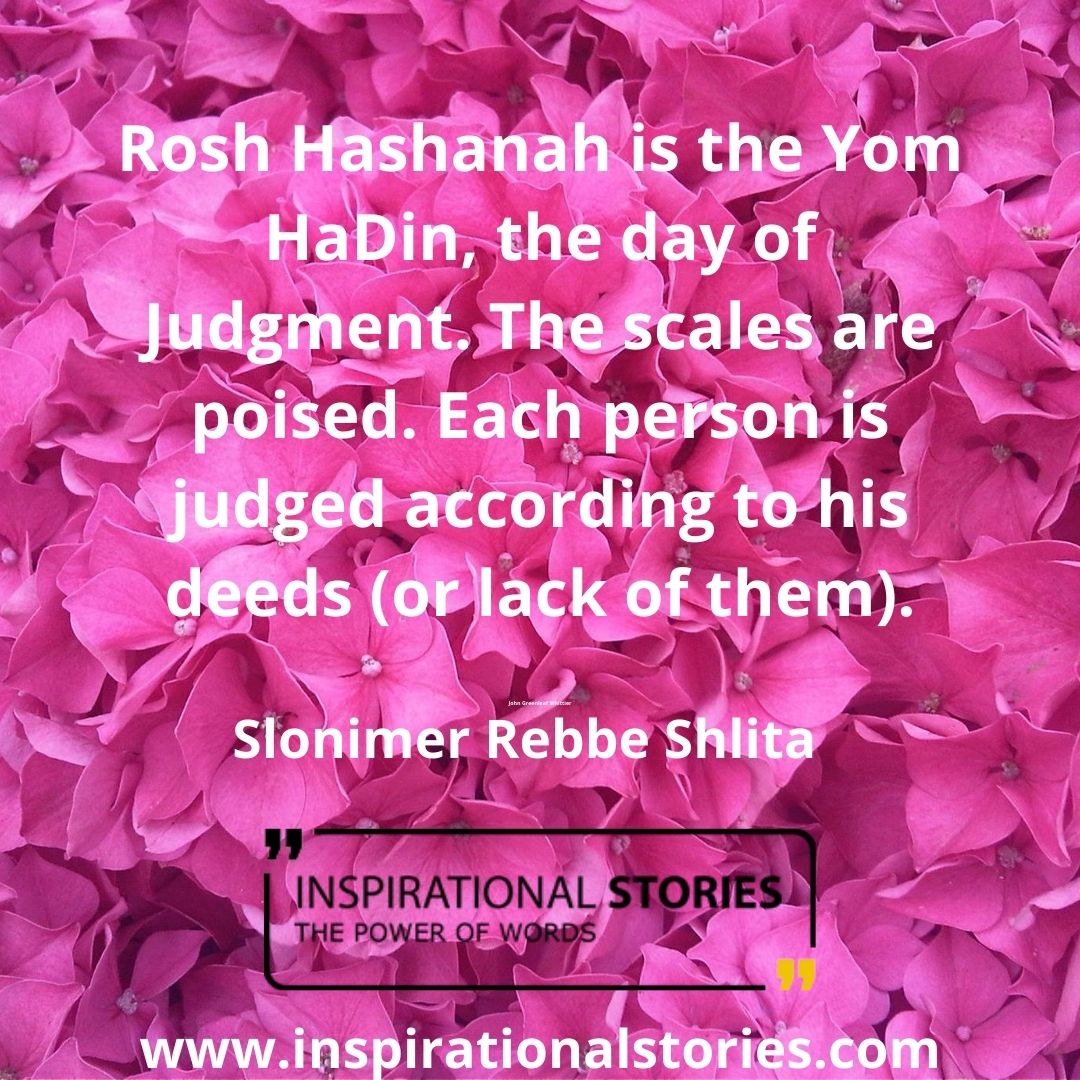 It says in the Talmud that on Rosh Hashanah three books are opened before Him: the book of Tzadikkim, the book of Resha’im, and the book of Beinonim (intermediates).
Reb Sholom Brodt

On Rosh Hashanah we are aware that God is judging us. But God is truly judging us every moment of every day. It is only on Rosh Hashanah that we, as a people, pause to reflect on this phenomenon.
Michael Mascolo

At the beginning of the period of judgment – on Rosh Hashanah and Yom Kippur – all the world’s inhabitants pass in individual review before G-d. During the Festival of Sukkot, the entire world is judged concerning water, fruit, and produce.
Eliyahu Kitov

During Rosh Hashanah, Jewish people ask God for forgiveness for the things we’ve done wrong during the past year. We also remind ourselves not to repeat these mistakes in the coming year. In this way, Rosh Hashanah is an opportunity to improve ourselves. It’s a holiday that helps us to become better people.
Tori Avey

Rosh Hashanah is the Creation of the World. It is a time to recreate ourselves by recognizing our faults, repenting and asking forgiveness from others for our sins, all leading to atonement, granted by God for our actions.
Marc Rubenstein

Rosh Hashana is steeped in ritual. We eat the head of a sheep or fish as a symbol of leadership and ascendency. We dip our challah and apple in honey in the hope of a sweet year.
Rabbi Eliyahu Hoffmann

But the most important renewal of life is that which occurs on Rosh Hashanah. Because that is when all life of the previous year returns to its essential source and a new life, such as was never known before, emerges from the void to sustain existence for an entire year.
Tzvi Freeman

No single article can capture the paradox of Rosh Hashanah, much less explain it. To understand Rosh Hashanah, we need to experience it — spend those hours praying in shul, hear the shofar’s hundred notes, dip the apple in honey and eat the tzimmes.
Yanki Tauber

On one hand, we know that Rosh Hashanah is the Day of Judgment. The scales are poised. Each person is judged according to his deeds (or lack of them).
Binyomin Adilman

Rosh Hashanah isn’t just about being new, it’s about a change.
Max Levis 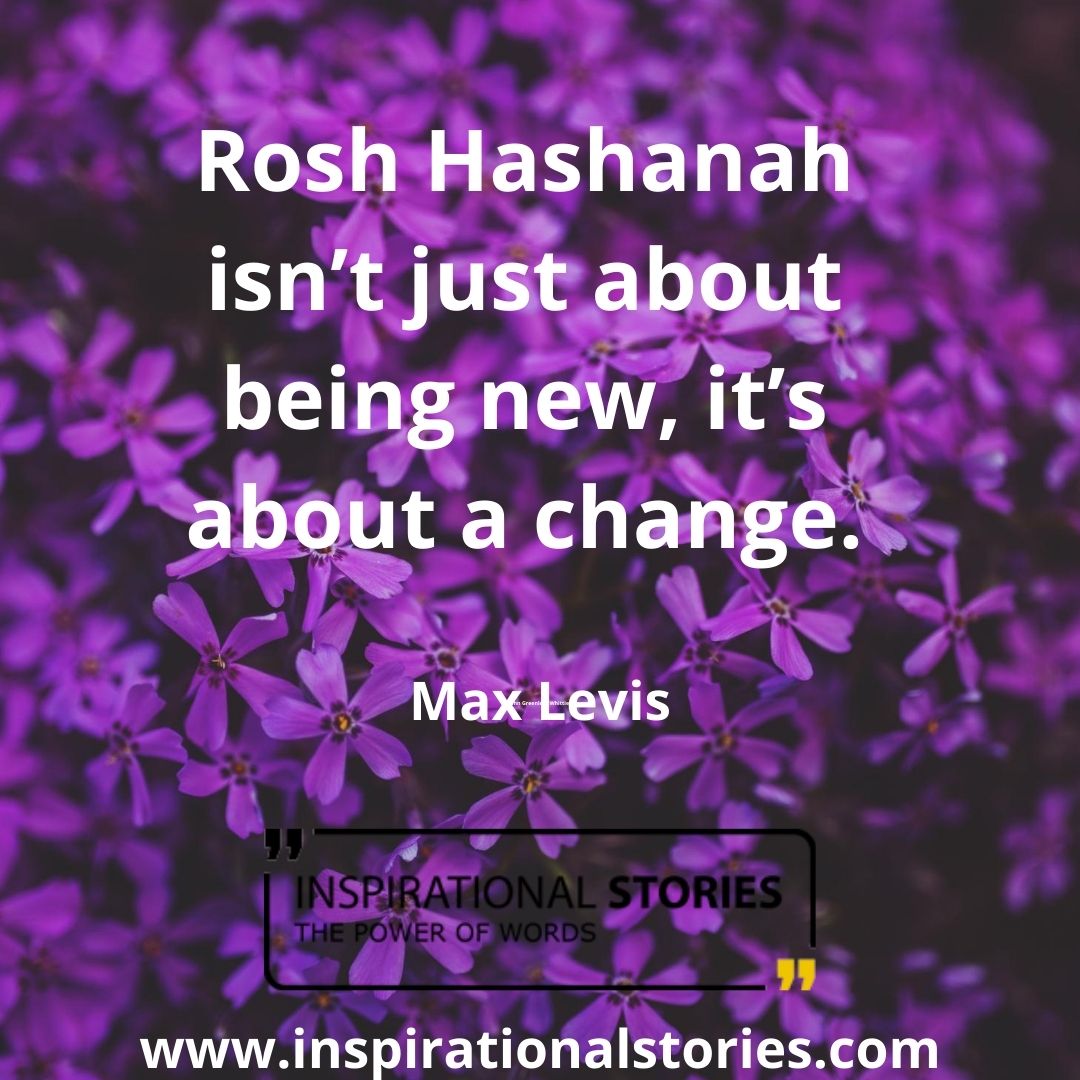 In that spirit, we offer you a list of the most inspiring Rosh Hashanah quotes that you can share with loved ones and friends.

Shanah Tovah Umetukah to all!

135+ Depression Quotes To Speed Up The Mental Recovery