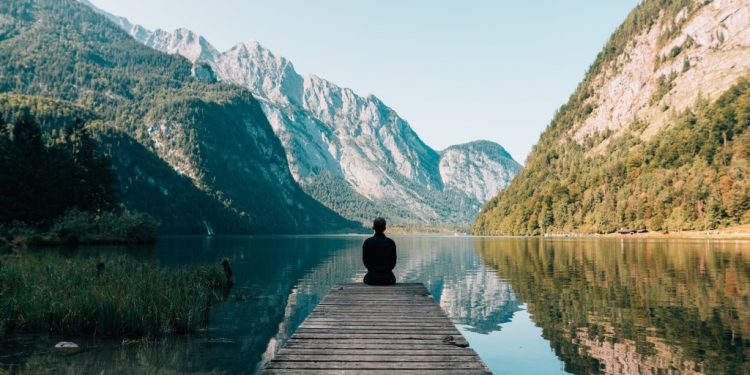 I listened from the kitchen to an unremarkable conversation occurring in the bedroom.

“You need to put your slippers there by the edge of the bed.”

After a girlish giggle, the second voice answered, “OK, I’ll move them now.”
“Good girl. I don’t want you getting hurt…”
“Thank you. It’s nice you are here to help me…”

But the conversation was not unremarkable –there was only one person in the bedroom.

My mother could best be described as the original earth-mother with Victorian sensibilities. In another time, she loved to garden and feel the warm earth in her hands. Recreation was being driven along some mountain road watching for wildlife — she never learned to drive. She was always simple in her lifestyle and had spiritual ideas that were a curious blend of the 1960s and a more pious, religious era. She saw God in all things natural, and yet was very modest and believed it was very important for people to dress modestly. She did not attend church, but tithed, read scripture and many religious magazines. She believed in “live and let live” and yet was highly offended at the freewheeling, open expression of the 60s.

Her health and her mental function had been deteriorating slowly in the past year, and for the preceding year she increasingly talked out loud to herself. It was not a conversation, but a monologue — not so unlike what we often do if we bump our arm and say out loud to ourselves, “Now, why did you do that?” The only difference was that her monologue was increasingly frequent.

But that changed one day. Probably some unknown, unseen bit of plaque on the wall of an artery somewhere had dislodged, and then obstructed a small blood vessel that fed some small area of my mother’s brain. Suddenly, she became fearful, even paranoid, and the monologue become a dialog. There was a child-like voice, and one that seemed adult, which I called “the protector.” That voice alternatively praised, reminded, and admonished the girlish voice. But, and I don’t say this with impertinence, for several weeks that two-in-one person got by and together made almost a whole person as we had innumerable doctor visits and tests. Unfortunately, the two voices soon became three and then five.

The diagnosis was Alzheimer’s — although it is not classic Alzheimer’s, as I understand it. Whatever its name, does not change the fact of what it is.

The realization came to us, her family, but not to her, that her 85 years of independent life was gone. We faced the horrible choice that all too many face — how to care for someone who requires more physical and mental care than a family can provide. We made the heart wrenching decision to place her into a nursing home.

I sat one night in her wheelchair, by her bed, as she sat on the edge of the bed. I asked if I could help her undress and put on her nightgown. She answered, “Why, thank you.”

She unbuttoned her blouse as she chatted with her unseen companions. The medications made them less intrusive, and her less fearful. I helped her take off her blouse.

“Can you unhook this?” she said referring to her bra. I knew at that instant the mother I had known and loved all my life was in a very real way gone from this world. She would have never disrobed in front of me. Certainly the body lived on, but her essence was gone.

I got her into her nightgown, and tucked her into bed. I touched her cheek with the back of my forefinger, smoothed her hair behind her ear, and said, “I love you, mom,” as I kissed her on the cheek. “See you another day.”

“Goodnight,” she said as I was walking out the door of her room.

I turned and smiled, and then turned again and walked out of the door of her room.

I heard the protector voice say, “Who was that?”
“I don’t know,” another voice responded.
The girlish voice said, “He’s nice.”
Their conversation faded as my footsteps echoed down the polished hallway, as I walked towards the Alzheimer Unit’s locked door. A nurse’s aide let me out of the unit, and I walked past the nurses’ station and out the door.

It was raining lightly as I walked across the parking lot. But, it must have been enough to blur my vision.